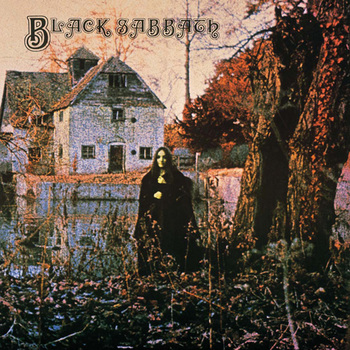 "What is this that stands before me?"
Advertisement:

Black Sabbath is the debut album by Black Sabbath, released on Friday, February 13, 1970. Widely considered the first true Heavy Metal album, it was recorded within only a 12-hour period between a few European gigs. The lyrics deal with far darker themes than their contemporaries, dealing with occultism, Satanism, and Lovecraftian horrors, and the trademark dark banjo-stringed guitar, alongside Ozzy Osbourne's vocals, made it even more radical and unique.

The album was a commercial success, having gone to number eight on the UK charts after its release. After its June 1970 release in the States, it peaked at number 23 on the Billboard charts and sold one million copies during the year that it was ranked there.