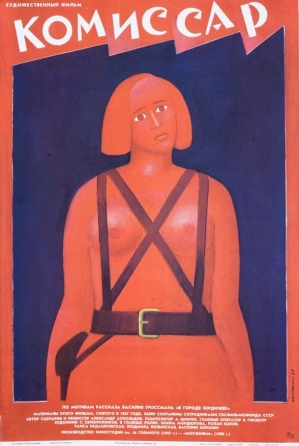 Commissar (Комиссар) is a 1967 film from the Soviet Union, directed by Alexander Askoldov.

The film is set sometime circa 1919 or 1920 during the Russian Civil War between Lenin's new Communist regime and the anti-communist Whites. Klavdia Vavilova is a tough-as-nails commissar with a cavalry unit. Unfortunately she is also pregnant, thanks to a passionate fling with another cavalryman who has since been killed in action. After her unit moves into a Ukranian town, Klavdia is boarded with the Magazanniks, a Jewish family, while she carries her baby to term. Husband Yefim is none too pleased by being forced to take in a guest, but wife Maria takes to Klavdia right away, and Yefim is eventually won over. Klavdia bonds with her hosts and starts to act more like a stereotypical mother—but an advance by the Whites threatens this picture of domesticity.

By the time this film was produced the "Khrushchev Thaw" that had produced a flowering of Soviet film (Ballad of a Soldier, The Cranes Are Flying, Ivan's Childhood) was pretty much over. (Nikita Khrushchev himself had been deposed in 1964.) Director Askoldov was expelled from the Communist Party and kicked out of the movie business; Commissar is the only film he ever directed. The film itself was shelved by Soviet censors and wasn't released until 1988, during the glasnost thaw of Mikhail Gorbachev.