Film / Last of the Wild Horses 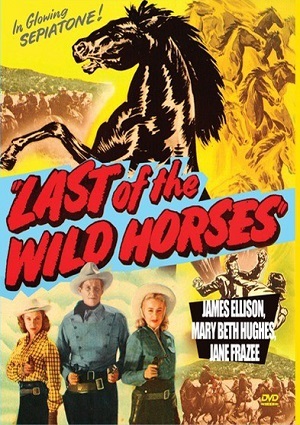 Last of the Wild Horses is a 1948 western film directed by Robert L. Lippert.

Drifter Duke Barnham finds himself in the middle of a budding range war in Jacksonville, Oregon between local land baron Charlie Cooper and the other smaller ranchers in the area over Cooper's prideful refusal to stop poaching mares from the local wild horse herd—a practice that would soon mean the end of the herd.

What no one knows is that the conflict is being secretly provoked by Cooper's ranch foreman, Riley Morgan, who plans to start a full on-war between the ranchers, then step in and buy up the lot when the law eventually rounded up the ranchers.

Can Duke, along with Cooper's daughter, Jane, female ranch hand Terry and Jack-of-All-Trades Remedy make Cooper see the light before tragedy strikes?note Nope. Can they expose Riley's treachery?note Yes, but not before several deaths.