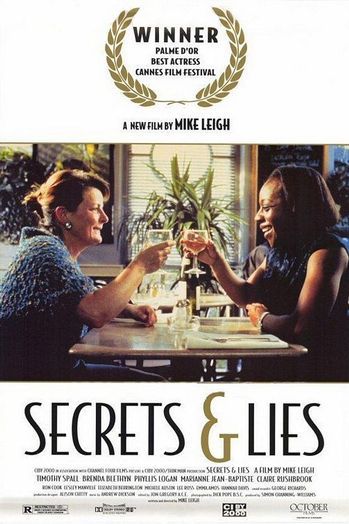 A 1996 British drama film set in London and directed by Mike Leigh. It stars Brenda Blethyn and was ranked the 40th best British film of all time by British Film Institute.

Following the death of her mum, young optician Hortense Cumberbatch (Marianne Jean-Baptiste) decides to seek out her birth mother, whom she is surprised to discover is white. Elsewhere, factory worker Cynthia Purley (Brenda Blethyn) lives with her sulky 20-year-old daughter Roxanne (Claire Rushbrook) and has a fraught relationship with her younger brother Maurice (Timothy Spall), who runs his own photography business, and his wife Monica (Phyllis Logan). Cynthia then gets a phone call from Hortense, who tells her that she is the daughter she gave up for adoption as a teenager. Things come to a head when Cynthia invites Hortense to Roxanne's 21st birthday party at Maurice and Monica's, suggesting that she pose as a friend from work.

Not to be confused with the 2015 Secrets & Lies series on ABC.