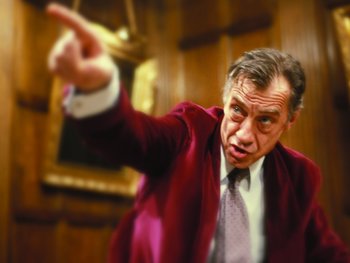 "You have read in the press the reasons for the Watergate affair. Today, my client is going to reveal to you the reasons behind the reasons."
Advertisement:

A 1984 film by Robert Altman, starring Philip Baker Hall as former U.S. President Richard Nixon, written by Donald Freed and Arnold M. Stone and based on an earlier play by the author.

The movie is essentially a ninety-minute one-man performance, based around Nixon — at some point following his resignation in disgrace after the Watergate scandal — dictating into a tape recorder in his study for an unseen aide, 'Roberto', with a bottle of liquor and a loaded revolver. While the subject matter begins rather mundanely, Nixon's train of thought tends to wander, leading him into an increasingly rambling, heated monologue about his life, political career and political enemies, aimed at an unseen (and presumably non-existent) judge and jury, gradually building to an undisclosed hidden truth about Watergate and the real circumstances behind his resignation.