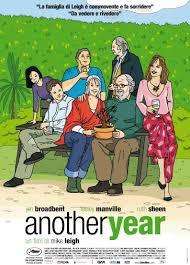 A 2010 film directed by Mike Leigh. It looks at a year in the life of Tom and Gerri, a Happily Married elderly couple working and living in London; they garden, they work, they feed their friends and they're in love. Throughout the film we're introduced to the people around them. Single-and-looking Mary, who works at Gerri's office; their activist lawyer son Joe, who has yet to settle down, their old friend Ken, Tom's brother and widower Ronnie.

It's a very slow-paced, conflict-free Slice of Life film, that makes use of incredible acting, natural dialogue, wonderful writing and subtly dark humour to carry the itself.