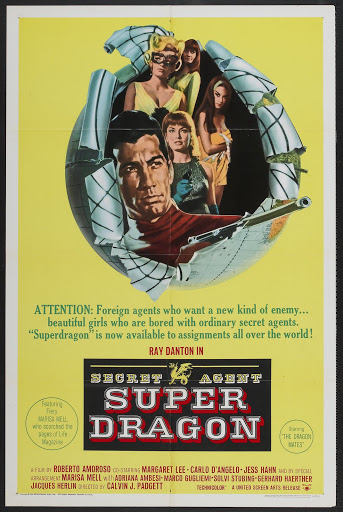 Super Dragon is a low-rent James Bond who, despite being retired, is called back into action when a colleague is killed. The case the colleague was working centers around a mysterious new drug which has been turning the student body of a small college town into a mindless mob; and the investigation leads Super Dragon on a trail of intrigue to Holland, several nice apartments, a charity art auction, a Ming vase smuggling ring, and tainted chewing gum (seriously) with which the bad guys plan to Take Over the World (seriously!). Along the way, Super Dragon will need the help of ever-loyal Agent Fulton, ex-con and Gadgeteer Genius Babyface, smokin' Agent Rembrandt 13, an "attractive for her age" hotel proprietor, and all his wits.