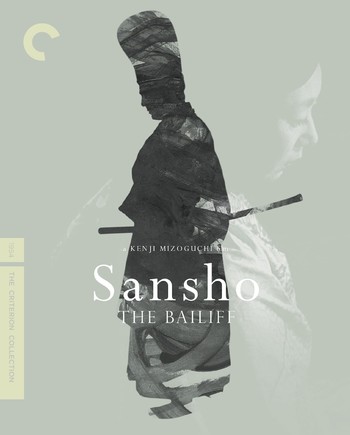 Sansho the Bailiff is a 1954 film directed by Kenji Mizoguchi.

It is set in Japan during the Heian period (794-1185). A governor loses his job and is exiled for being too nice to his people—specifically, not drafting them for the emperor's army and not confiscating their crops for taxes. His wife Tamaki and their two children, son Zushio and daughter Anju, are sent off to live with her brother.

Several years pass, long enough for the children to age from elementary-school level to teenagers. Eventually Tamaki attempts to join her husband in exile. They are camping out in the open in the countryside when a miko (a Shinto priestess) offers them shelter, which they gratefully accept.

Only it turns out that the miko is evil. She hands the lot of them over to slavers. The mother is forced to become a courtesan. The story then follows Zushio and Anju, who are sold into slavery, forced to work under brutal conditions on the estate of a lord, which is managed by the merciless Sansho ("bailiff" in this context meaning manager of a lord's estate and holdings).

A decade passes; the siblings age from teenage years to adulthood. Anju has held on to her humanity and compassion despite horrible suffering. Zushio however has given up, submitting to the brutality of life in the slave camp, branding a would-be escapee on Sansho's orders. However, when Anju and Zushio are ordered to drag a sick slave into the forest so she can die, Anju rebels, appeals to her brother's decency, and suggests they escape—and he agrees. But much suffering remains to be played out.