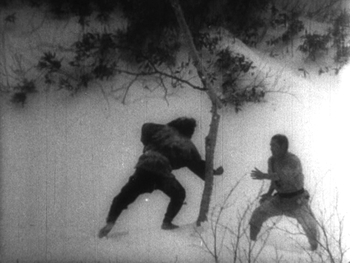 Battle in the Snow
Advertisement:

It was Kurosawa's third feature and a sequel to his first feature, Sanshiro Sugata. The film is set in Yokohama in 1887, two years after the end to Sanshiro Sugata. Sanshiro Sugata is still enjoying the life of a famous champion judoka, famous enough that children sing songs about him. His girlfriend Sayo still awaits him back home (wherever that is; the first film's setting is vague). Sugata, while still studying at the judo school of his master Yano, takes on his own protege in the form of a Yokohama teen named Daizaburo.

But since this is a movie complications arrive. One problem arises in the form of an obnoxious American boxer named William Lister (reminder: this movie was made in 1945), in Yokohama for a cultural visit, who seeks a match with Sugata in order to prove his superiority. A second and much bigger problem appears in the form of Tesshin and Genzaburo Higaki, brothers of Gennosuke Higaki, the villain of the first movie. While Gennosuke no longer holds any hatred for Sugata (in fact, events will show that he is a broken man), his brothers thirst for revenge. They want to kill Sugata, and they have mastered another martial art, Karate, to do it.