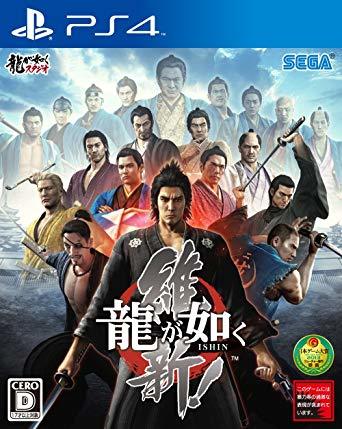 Ryu ga Gotoku Ishin! (translates to "Like a Dragon Restoration!"; unofficially known by fans as Yakuza Ishin) is the second samurai-based Spin-Off of the Yakuza series. It was released on February 22, 2014, for both the PlayStation 3 and PlayStation 4.

Like its predecessor Kenzan, Ishin takes place in feudal Japan, this time during the 1800s (during the Bakumatsu period, to be exact, between 1853 and 1857) and focusing on the life of Ryoma Sakamoto, another real-life figure in Japan's history. After the murder of both his mentor and father figure, Sakamoto goes undercover to find out the identity of the swordsman who took them down. Under the name Saito Hajime, he infiltrates and joins the Shinsengumi, a police force organized by the government at the time, in order to get to the bottom of his predicament.

The combat expands upon the Hack and Slash-based system of Kenzan, but with several new elements including the addition of special weapons, including spears and axes, as well as the addition of gunplay with the ability to use a pistol, either on its own or along with your sword to allow for more combo variety. Due to the universe of Yakuza expanding drastically since Kenzan, the open-world gameplay also received an overhaul, with a larger map, more substories and characters, and more of the quirky minigames that the series is now famous for, including fan dancing, chicken racing, and even raising a farm. Also included is the Battle Dungeon mode, which allows you to traverse several halls of enemies with the assistance of Soldier Cards, which give you a boost in a certain stat during combat; playing this mode allows you to gain rare items to craft better weapons and gear.

The PS4 version was a launch title for the system in Japan, making it the first game in the series to release for the eighth generation. As Kenzan launched when the series was still relatively new, Ishin boasts a much larger cast of familiar characters to model its own after, due to the series increasing its cast significantly since then.

Just like Kenzan, Ishin also only came out in Japan, with Western players able to buy an imported copy to experience it for themselves on either platform, due to the PS4 being region-free as well. If you don't speak any Japanese, KHHsubs once again has fans covered, with an in-depth, translated guide

for the game, including a full text walkthrough, a downloadable PDF guide, help with weapon forging and substories, a translated video walkthrough in the works, and more. While Sega initially stated they had no plans to export the title, they revealed in August 2019 that a localization is under consideration. Whether they follow through with this or if it was just a thought has not been established yet, however, so take the claim as you will.