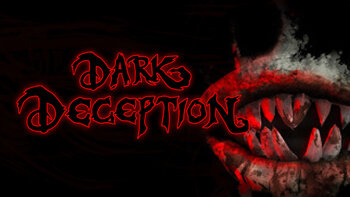 The clock is ticking.
Advertisement:

You play as a faceless protagonist who apparently has met their end. Rather than go to the great beyond, you find yourself face to face with a woman named Bierce who offers you a chance to live again in exchange for a few small... tasks. Namely, heading into a few portals and collecting a few gems. Seems simple enough, save for the fact that the places she sends you to are nightmare realms patrolled by some very ghastly beings who aren't afraid to rip you apart on sight. Bierce offers a little aid, but for the most part, you're on your own with nothing but your wits to survive. Plus there might be the tiny little fact that Bierce might not be on the up and up...

A multiplayer-based spinoff known as Dark Deception: Monsters & Mortals was released in November 2020. It is a four-player game where players compete in mazes to collect the most shards while avoiding being killed by one another. It received a crossover DLC based on Monstrum a month later. A second DLC based on Silent Hill was announced on March 21, 2021. On December 10, 2021, a third DLC based on House of Ashes was announced.

No relation to Tecmo's Deception series.