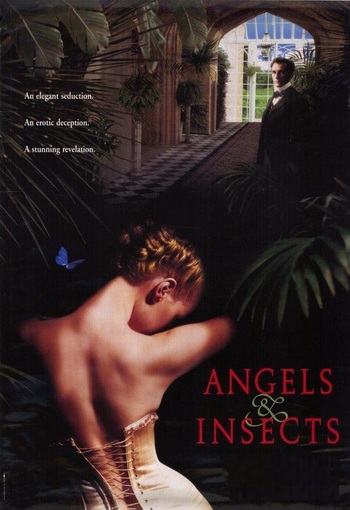 Angels & Insects is a 1995 American-British romance drama film directed by Philip Haas and starring Mark Rylance, Patsy Kensit, and Kristin Scott Thomas. It was written by Philip and Belinda Haas with A. S. Byatt after her novella Morpho Eugenia (included in her book Angels and Insects).

In Victorian England, naturalist William Adamson (Rylance) goes to live with his benefactor, Sir Harold Alabaster (Jeremy Kemp), being employed to catalog Sir Harold's specimen collection and teach natural sciences to his younger children. There, William becomes enamoured of Sir Harold's eldest daughter, the soft-spoken but anxious Eugenia (Kensit). However, although Eugenia accepts his marriage proposal and Sir Harold grants his approval, Eugenia's snobbish and spoilt brother Edgar (Douglas Henshall) dislikes William, ostensibly due to his humble origins. While William's life appears otherwise to be content, with the marriage producing children, spending much of his time with the younger Alabaster children and observing insects in the forest, and forming a bond with the Alabaster children's governess, the unassuming Matty Crompton (Scott Thomas), who encourages his scientific activities, William will soon discover a terrible secret.