Film / Angel on My Shoulder 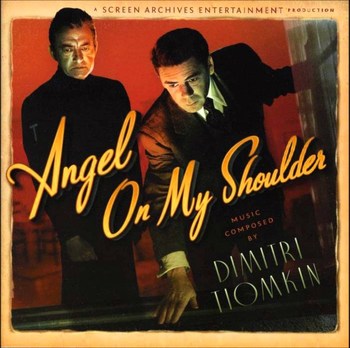 Angel on My Shoulder is a 1946 film starring Paul Muni, Claude Rains, and Anne Baxter, directed by Archie Mayo, in what turned out to be his last film.

Eddie Kagle (Muni) is a gangster who has just gotten released from a four-year stretch in prison. He is picked up by his #2, Smiley Williams...who promptly murders him.

Eddie finds himself in Hell. His rather uncooperative behavior in the place of eternal torment draws the attention of Satan, aka "Nick" (Rains). It just so happens that Eddie is a dead ringer for a crusading do-gooder judge and gubernatorial candidate, Frederick Parker (also played by Muni, but really only as a body double for himself). Nick hatches an idea to send Eddie back to the land of the living and inhabit the body of Parker, so he can ruin Parker's reputation and remove him as a force for good. Eddie does so, but complications ensue, including the utter confusion of his fiancée Barbara (Baxter).

If any of this business of talking with the Devil or returning from the afterlife sounds vaguely familiar, it should, as screenwriter Harry Segall also wrote Here Comes Mr. Jordan as well as the original play that was adapted into Heaven Can Wait (1978).