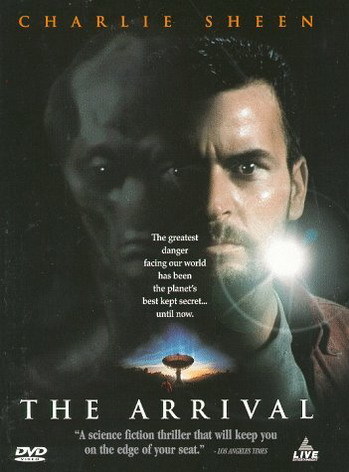 "If you can't tend to your own planet, none of you deserve to live here."
Advertisement:

The Arrival is a 1996 Science Fiction film starring Charlie Sheen.

The United States is caught in a major Heat Wave that is pressing into autumn.

Zane Zaminsky (Sheen) is an astronomer who works for SETI. One night he finds a signal, but it gets cut off before he can verify it with another station. He takes the recording to his boss (Ron Silver), who dismisses it. Eventually he finds himself out of a job, and tries his best to keep studying in his new job as a satellite cable worker. He discovers that not only are signals coming from space, but someone on earth is responding.

Meanwhile, climate researcher Ilana Green (Lindsay Crouse) is stunned to find a field of wildflowers growing in the arctic. She brings her findings back to her superiors, but they cannot verify anything as the satellites they count on are malfunctioning.

Both track the leads on these mysteries to a small town in Mexico, where they learn larger things are afoot.

It is considered to be a very solid, believable, enjoyable sci-fi film and was well received by critics, but it didn't do very well in the box office.

Was followed by a not-as-well-reviewed Direct to Video sequel in 1998 called The Arrival II with none of the original cast returning. The sequel begins with five people receiving letters about the alien conspiracy from the first film, and then follows the story of how the aliens have stepped up their schedule due to the events of the first film.

Not to be confused with the 2016 film Arrival, or with the graphic novel by Shaun Tan.

Tropes in the sequel