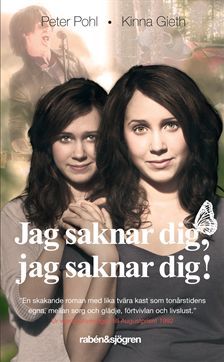 Cilla and Tina are identical twins. They are fourteen years old and have typical teenage problems. Cilla is down to earth, slightly tomboyish and an outcast in their class. Tina is popular, boy-crazy and somewhat shallow. One morning when they are late for the bus to school and race across the street to catch it Cilla is hit by a car and dies. The remainder of the story follows Tina in the first year after her sister's death as she struggles to live her life without her twin, deals with her sorrow and attempts to live a normal teenage life.

The book is co-written by Peter Pohl and Kinna Gieth. Pohl is a popular Swedish writer of youth fiction and his book "Alltid den där Anette" deals with the topic of a character losing their twin. Kinna Gieth and her identical twin sister Jenny read the book together and talked about how they wouldn't be able to go on if the other died. Two weeks later Jenny was killed in a car accident. Gieth contacted Pohl and asked him to help her tell her story and the resulting book is a mixture of fact and fiction, based on the diaries of the Gieth twins, interviews with Kinna and her family and correspondance between Gieth and Pohl.

Nineteen years after the book was published a movie was released, the title shortened to "I Miss You". Noteable changes in the movie include leaving out the twins' stepbrother Jonny, changing the name of a character from Bahir to Ailu and making the twins' father Italian rather than French.