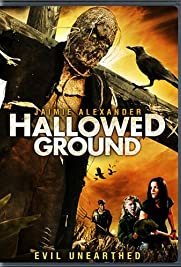 Liz Chambers' car breaks down in the middle of a small Town with a Dark Secret. A hundred years ago, their founder descended into fanatical madness and crucified his town's sinners as scarecrows. He was killed by the residents of a nearby town, but vowed to return. Nowadays, his cult has reformed and is plotting to bring him back by their current preacher mating with a woman who bears a mark on her skin. A mark Liz has tattooed...