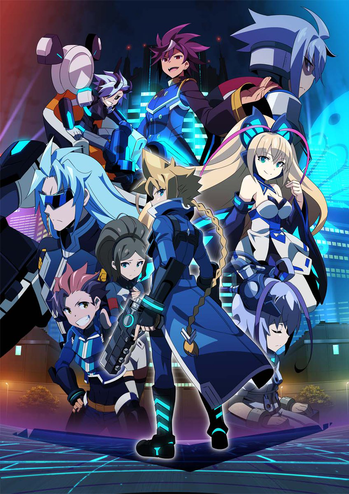 Azure Striker Gunvolt: The Anime (Armed Blue: Gunvolt OVA in Japan) is a 22-minute Original Video Animation based on Inti Creates' Azure Striker Gunvolt Series of 2D action platformer games and animated by LandQ Studios. It is an adaptation of part of the first game in the series, Azure Striker Gunvolt. It was released on February 9th, 2017 via Nintendo eShop, and on BD on September 28, 2017.

20 Minutes into the Future, young people start appearing with mysterious psychic powers. They become known as Adepts, and their powers Septima, and become feared by the populace. To protect the public, the Mega-Corp Sumeragi Group uses its "Psychic Protection Program" to keep both Adepts and regular folks safe. However, unbeknownst to the public, this "Psychic Protection Program" is a front for Sumeragi to catch and experiment on Adepts. Upon learning of their atrocities, the independent organization "QUILL" (FEATHER in Japan) is formed to counter Sumeragi and free Adepts under their control.

This is the story of the titular Gunvolt, a young teen freed from Sumeragi's experiments by Asimov, an Adept who leads QUILL's SHEEPS unit in Japan. As the result of Sumeragi, Gunvolt possesses a Septima known as "Azure Striker", which allows him to control and manipulate lightning and electricity. When SHEEPS is tasked with eliminating Lumen, a virtual idol Sumeragi is using to locate and capture Adepts, Gunvolt begins a crash course with a dangerous destiny...