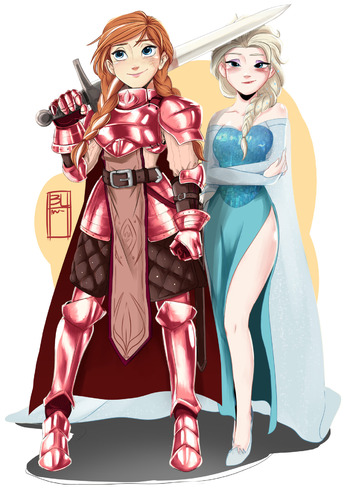 of The Queen's Mercy
Advertisement:

. The story is set in an alternate universe in which Elsa, Princess of Arendelle, grew up an only child and thus never came to fear her magical abilities. At the age of twenty three, she has ruled Arendelle for five years following the deaths of her parents. Despite public knowledge of her powers and her status as an unmarried Queen, her reign has been stable and allowed her kingdom to prosper.

But everything changes the night that an orphaned, impoverished thief named Anna mistakenly breaks into her bedroom. Despite her duties as Queen, Elsa takes pity on Anna's situation and allows her to walk free. And after the thief returns the favor by rescuing Elsa from the first strike of a brewing conspiracy, she is invited to lodge temporarily within the Queen's Palace.

It's not long before the two women start growing close. And as Elsa suddenly finds herself under attack from all sides by a mysterious group that will go to any lengths to see her fall, she and Anna have no choice but to depend upon one another for survival.

The story is being hosted on FanFiction.Net and the first chapter can be read here

. As of January 2018, it stands completed at 95 chapters, with promises of bonus chapters.

Spoilers up through Chapter 64 will be unmarked.

The Queen's Mercy demonstrates examples of the following tropes: