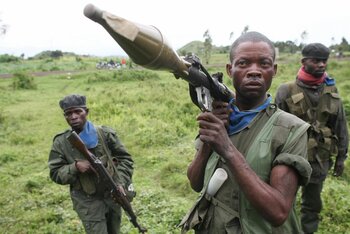 We saw you all in the streets, dancing in the glory of monsters.

The Congo Wars (not to confused with the Congo Crisis, which occured in The '60s against the backdrop of the Cold War) were two conflicts that have ravaged the Democratic Republic of the Congo starting from 1996. The conflict theoretically ended in 2003, when the Transitional Government took charge in the country, but fighting still persists as of today. The second conflict, in particular, has killed more than 5 million people, making it the deadliest conflict since World War II. The deadliest phase, the Second Congo War (1998-2003), is thus also called the Great War of Africa (referring to the original "Great War"). All the parties involved took advantage of the rich resources of the Democratic Republic of Congo and generally stomped the country to the ground. In fact, the conflict is eerily similar to the Thirty Years' War fought more than three centuries earlier.

Considering all the different factions present in both wars, explaining the whole thing in a coherent way is more difficult than it seems, but we’ll give it a try.

Mobutu had been in command of the DRC (then known as Zaire) since 1965 and, though he had promised reforms in the country, in general did nothing more than enrich himself while Zaire impoverished even more. At this time, the country was a failed state, the army had to maintain themselves by looting and the east areas were out of the capital’s control, controlled by the Banyamulenge, Tutsis living in Zaire. The main problem with the ethnic term is that it doesn’t differentiate between the Tutsis that historically immigrated and the ones that came more recently because of the turmoil in Rwanda and Burundi. When Mobutu ordered all of them repatriated, that included the Banyamulenge, and many of them ended forming part of the Rwandan Patriotic Front, a rebel group.

When the Rwandan Genocide came to an end, the Rwandan Patriotic Front was at command and started to persecute the former Hutu genocides (called génocidaires), prompting most of them to flee to Zaire. The problem was that many Tutsis that had fled the genocide had the same idea, and soon victims and victimizers found themselves in the same place. Guess how well that came out. To worsen things up, Mobutu not only couldn’t control what happened in the area, but actually tried to help the génocidaires for an eventual invasion of Rwanda. Things escalated until a Banyamulenge rebellion started in 1996 and a militia headed by Laurent-Désiré Kabila was formed, the Alliance of Democratic Forces for the Liberation of Congo, after which the neighboring countries of Rwanda, Angola, Burundi and Uganda decided to join the conflict for different reasons; Rwanda to stop attacks to the country from the génocidaires in Zaire and to establish a puppet regime in Kinshasa; Uganda and Burundi because of their sympathy with the Tutsis; Angola because Mobutu’s cronies provided the partisan group UNITA with armament (at that time, Angola was still caught in a civil war). Zaire received support of the UNITA and the Army for the Liberation of Rwanda, formed for the most part of former génocidaires. Other countries also contributed in a minor role, like Ethiopia, Eritrea or Zimbabwe.

Given the poor status of Zaire’s army, the AFDL and its allies quickly gained control of the east area, achieving the objective of destroying the camps the genócidaires used as bases (it deserves to be mentioned, anyway, that Rwanda took advantage and repatriated all the Tutsis it could, despite their nationality, to recover population and workforce; not to mention the possible atrocities committed to the Hutus refugees). However, they decided to keep pushing and by 1997, Mobutu had been deposed and Laurent-Désiré Kabila proclaimed himself president and renamed the country Democratic Republic of the Congo, ending the First Congo War.

In a sane world, this would have ended here, with a crippled country in serious need of reconstruction and Kabila trying to get the country back on its feet. However, since this is the real world, it happened that the new regime was exactly like the one before, the corruption was still rampant, the ethnical tensions remained because of the centralized government and, to worsen things up, Kabila realized he was seen as an instrument of the foreign governments, so he started to turn against them, eventually expelling them from the country.

In 1998, a couple of militia groups mutinied and started to fight with the government and, starting from there, all hell broke loose, as multiple nations entered (or re-entered) to the DRC, in a confusing mess that is almost unexplainable. The only comprehensible thing was the ravaging and the humanitarian disaster that followed the fighting. Ironically (or maybe not), on this occasion the sides were reversed; Uganda, Burundi and Rwanda were now the enemies of the DRC (along with some Tutsi movements, the Movement for the Liberation of Congo and the Rally for Congolese Democracy), while Angola, Chad, Namibia and Zimbabwe were the allies of DRC, along with some other parties like Libya and Sudan; most of them were in it for the resources in the country, especially the diamond industry (Zimbabwe, Namibia and Libya being the most blatant examples of this). There were about 25 armed groups involved, because many of the countries involved had rebel militias that entered the war in the opposite band, and sometimes some of them split to form new militias.

In 2001, Laurent-Désiré Kabila was killed by his bodyguards and his son, Joseph Kabila, took the presidential office. He started negotiations with Rwanda to end the conflict but, in the meantime, the exploiting of the Congo’s resources continued. With time, however, the fighting slowed and eventually stopped, in part because Rwanda achieved to convince the DRC of complying with some of their objectives (although others, like the disbanding of the Interahamwe, which took part in the genocide of 1994 and had taken refuge in Congo, didn’t), but for the most part it was because the parties involved started to get tired of the never-ending violence.

Today, the conflict still persists in the form of rebel groups in the main conflict areas of the east, like the Kivu and Ituri conflict or the militia group Mai-Mai, which simply slipped out of control of the government. Some of the groups are funded by other governments, which only make things more complicated. As for the humanitarian cost, there are millions of displaced internal and externally, more than five million deaths and all the sides acting like monsters with all kinds of crimes, including mass killings and war rape.

Despite the fact that this was a massive war, with all the ingredients to make a good War Is Hell story, there is almost no media portrayal of the Congo Wars. No comments about that. There is at least The Peacekeepers, a documentary about efforts to have U.N Peacekeepers sent there in 2002.