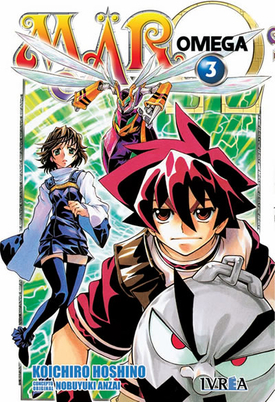 MÄR Omega is a Sequel Series to the popular Manga / Anime series MÄR.

The story takes place six years after the original and MÄR Heaven is in a time of peace with Team MÄR and Ginta being idolized across the land. One who reveres them as such is Kai, a very headstrong yet kind lad. Since the war, ARMs known as Fake ARMs which anyone can use have become a popular commodity across the land and are used in tournaments, though oddly Kai can't use them.

However fate intervenes one day as while out running errands he comes across a former Chess Piece who tries to rob him. In trying to get away, Kai falls into a lake and finds Babbo. Who, after the War Games and Ginta returning to his world, wandered aimlessly until he had fallen into the lake and went dormant least until Kai latent magic powers awakened him. After dealing with the Chess Piece and returning home. it's eventually revealed that someone is after Babbo. After Kai's village suddenly disappears following a fight, he, along with his friend Elisa go on a journey to strengthen their magic and defeat the mysterious organization who supplied the Fake ARMs in the first place.

While sharing the MÄR name, the series was not written nor drawn by original creator, Nobuyuki Anzai (though he apparently did approve of it's creation). Rather his assistant, Kōichirō Hoshino, who would go on to create Popcorn Avatar, was responsible for the majority of it. It lasted from 2006-2007 with 39 chapters, resulting in four volumes total. Interestingly unlike the original series, which was basically a series long Tournament Arc. This series focuses more on the adventure aspect.

MÄR Omega has the following tropes: