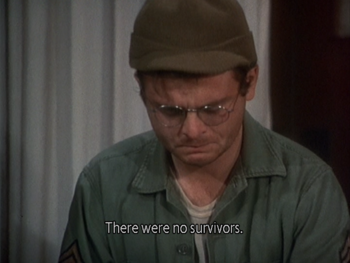 Although M*A*S*H originally started off as a comedy, it sought to remind the viewers that War Is Hell and affected everybody involved in ways that people wouldn't dare think of. From the wounded and dying soldiers having to fight to the physical and mental strains placed on the people trying to save both soldiers and civilians to the problems created by the long distances between their loved ones, it is a shocking reminder of just how horribly people can be affected by the actions and decisions of those who will never have to look them in the eye.