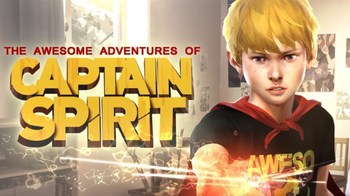 The Awesome Adventures of Captain Spirit is a 2018 free-to-play adventure game developed by DONTNOD Entertainment and published by Square Enix. It is set in the Life Is Strange universe and serves as a prologue to Life Is Strange 2, taking place simultaneously with the sixth chapter of its second episode, Rules.

It's December 2016, and Chris Eriksen is an imaginative nine-year-old boy who lives alone with his father Charles. On a cold winter Saturday morning, Chris dons the cape of Captain Spirit, his superhero alter-ego, and goes on a quest to defeat the evil Mantroid while avoiding the wrath of his drunk father.

The Awesome Adventures of Captain Spirit contains the following tropes.