All spoilers for Kingsglaive: Final Fantasy XV are unmarked. You Have Been Warned! 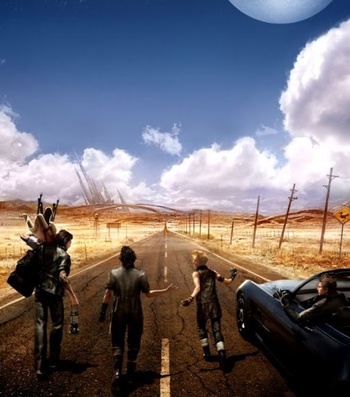 Just as long as you stand, stand by me.note From left to right: Gladiolus Amicitia, Noctis Lucis Caelum, Prompto Argentum, and Ignis Scientia
O’er rotted Soil, under blighted Sky,
a dread Plague the Wicked has wrought.
In the Light of the Gods, Sword-Sworn at his Side,
'gainst the Dark the King's Battle is fought.
From the Heavens high, to the Blessed below,
shines the Beam of a Peace long besought.
"Long live thy Line, and this Stone divine,
for the Night When All comes to Naught."
— Cosmogony 15:2, "Nadir"
Advertisement:

Final Fantasy XV, formerly known as Final Fantasy Versus XIII before its rebranding in 2013, is the fifteenth Numbered Sequel in the game-delayingly popular Final Fantasy series. It is the sixth entry in the Fabula Nova Crystallis: Final Fantasy subseries, sharing a common mythology with Final Fantasy XIII and Final Fantasy Type-0, albeit with no direct connection.note Game director Hajime Tabata has stated

that while XV thematically remains part of Fabula Nova Crystallis, its mythos has since "disconnected" from the subseries's core structure, and features lore vastly different from that of XIII and Type-0.

In the world of Eos, the Kingdom of Lucis possesses a Power Crystal that affords its nobility magical powers. For decades the expansionist Empire of Niflheim has been at war with Lucis, but while they have conquered most of the rest of the world, they cannot touch Lucis due to the Crystal powering a magical barrier that shields the nation from harm. Over the years Niflheim develops technological advances that allow them to press their advantage, forcing the Lucians to retract the Wall to merely shielding the crown city of Insomnia. Niflheim continues their push into Lucis, their eyes ever on Insomnia and the Crystal.

While Niflheim and Lucis war, the entire world lives in fear of the darkness. During the night daemons rise from the shadows, horrific monsters with supernatural powers that seek only to destroy and kill. The daemons can only exist in the dark, though, and are weakened by light. For this reason settlements across the land erect floodlights at the edges of their territory to repel daemons. However, some reports say the nights have begun to grow longer and the days shorter, causing fear that there may come a day when the sun does not rise at all, and with the world trapped in The Night That Never Ends, daemons will overrun civilization. Legend tells of the day that the "King of Light" will arise from the bloodline of the Lucian kings, and he will eradicate the daemons from the world and save humanity from darkness. This Chosen King is the current Crown Prince, Noctis Lucis Caelum, son of King Regis Lucis Caelum.

Niflheim approaches Lucis with an offer of peace, a condition of which is that Noctis will wed Princess Lunafreya Nox Fleuret of Tenebrae, a country under Niflheim occupation; Lunafreya is also the Oracle, a priestess able to heal the sick and wounded. Noctis departs on a trip to Tenebrae to wed Lunafreya with three companions: Gladiolus Amicitia, his Sworn Shield and bodyguard; Ignis Scientia, his advisor and team cook and driver; and Prompto Argentum, his best friend. While they are away, the peace negotiations turn out to be a trick — Niflheim seizes the Crystal, kills King Regis, and conquers Insomnia. With nothing but his friends, his father's car Regalia, and the magical abilities afforded them by the Crystal, Noctis sets out to defeat Niflheim, drive back the daemons, and fulfil his destiny as the King of Light.

In a major departure from previous main series Final Fantasy titles, XV is an Action RPG along the lines of Kingdom Hearts, enjoying tropes such as Implausible Fencing Powers, Spontaneous Weapon Creation, Weaponized Teleportation, taking cover and massive video game setpieces. Noctis is the main playable character, and combat is based around his mechanic of "Warping" to maneuver around the battlefield. A later update to the game made his three friends playable; Gladio is a Mighty Glacier, Ignis is a support-focused Magic Knight, and Prompto is a Glass Cannon with Third-Person Shooter elements. The game uses Square Enix's next-generation development platform, Luminous

, which was developed alongside the game.

The game was released worldwide on November 29, 2016. The road there, however, came after an infamously protracted Troubled Production. XV was first announced in 2005 as Final Fantasy Versus XIII, one component of the Fabula Nova Crystallis compilation alongside Final Fantasy XIII and Final Fantasy Type-0 (then called Agito XIII). Despite a CGI teaser trailer in 2006, Versus XIII at this stage was more or less a loose collection of scenario ideas and concept sketches. For several years, little additional information about the game was released until development finally entered full swing in 2011 with the first actual gameplay trailer, when director Tetsuya Nomura was joined by Hajime Tabata as co-director. Tabata would eventually take over full directing duties. In those six years the game had outgrown its engine, its name, and even its console generation, so the new Luminous engine entered development and the game was retooled for PS4 and Xbox One and rebranded as Final Fantasy XV. This new development was revealed in 2013 and the game continued its development cycle more smoothly up until its release in 2016.

Four more DLCs were planned for release throughout 2019, collectively titled The Dawn of the Future, but as of November 2018, three out of four have been cancelled, their story turned into a novel, with only one remaining to close out the saga:

Since launch, the game has also seen some limited time events:

Additionally, Final Fantasy XV has spawned a number of spin-offs and gaiden games.

An Updated Re-release of the console game, the Royal Edition, was released alongside the Windows port on March 6, 2018. This console-exclusive (but equivalent content-wise to the PC port) re-release includes new areas to explore, additional gameplay features, and the first season of DLC content.

In other news about guest fighters, Noctis appears as a playable DLC character in Tekken 7, with the Hammerhead garage as his stage, and the Regalia is a drivable car in Forza Horizon 3 and 4.

These are tropes for the multiplayer DLC Comrades, which shares many combat mechanics with the main game, but features a player-customized member of the Kingsglaive going through missions to help what little civilization is left during the 10 years of eternal night. The main goal of the player character is to get energy running so that lights powerful enough to fend off the daemons can be powered in other areas of Lucis - so that more people can find shelter and safe havens to go to.