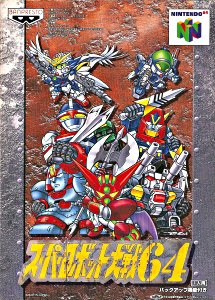 Super Robot Wars 64 (Sūpā Robotto Taisen Rokujūyon) is a strategy role-playing game for the Nintendo 64. Released in October 1999, this is the only entry for the Nintendo 64. Notorious for having loads and loads of stages, a rather complex branching system, and many original mecha the Shadow-Mirror would base theirs off of (or outright use).

Series in Super Robot Wars 64 (Debuting entries are in bold)

Tropes that this game has