Video Game / The Queen of Heart 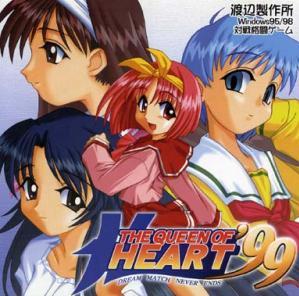 The Queen of Heart is a series of doujin Fighting Games, developed and published by Watanabe Seisakujo (Nowadays known as French Bread, of Melty Blood Fame).

The first two games are based on the Asuka 120% engine, gameplay-wise, they have 4 buttons: Weak, Medium and Strong attacks, and a Special button whose function varies from character to character. The games features characters from various games and visual novels by Leaf (Now Aquaplus), such as Shizuku, Kizuato and To Heart, among others. The first game, The Queen Of Heart 98, originally featured one-on-one modes, however, the second game, The Queen Of Heart 99, also included two-on-two modes where up to 4 players can compete note Or depending of the number of players, the rest will be occupied by the CPU; it also added more characters and rebalanced the existing ones.

A third game, called Party’s Breaker: The Queen of Heart 2001, was released in Japan that same year. It keeps the gameplay intact for th most part, although with the add of an Initiative Gauge, which allows the player to cancel any normal move, and most special moves into a dash, allowing the chance to perform longer and more devastating combos. However, it lowered the amount of playable characters and removed the two-on-two modes, returning to the one-on-one format. It mostly includes characters from subsequent works, more notoriously from Comic Party, with Mizuki Takase as the only returning character.

See also Aquapazza, a crossover Fighting Game made jointly by Aquaplus and Examu.

No relation at all to the Queen of Hearts.

open/close all folders
Related to QoH '98, ' 99 and ' 99 second edition
Related to Party's Breaker