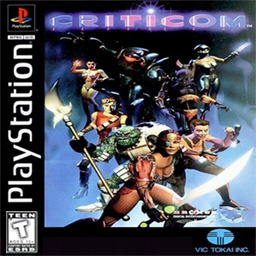 Criticom is a 3D versus fighting game developed by Kronos Digital Entertainment and released in November 1995 in the USA, March 1996 in Europe and October 1996 in Japan by Vic Tokai for the PlayStation. The Sega Saturn version was released in early 1997.

Criticom is a one-on-one fighting game where eight diverse fighters from across the galaxy vie for a crystal artifact. The game features a science fiction backstory that involves mystery and intrigue surrounding the crystal and each of the fighters is given a unique storyline to explain why he or she is so interested in the artifact.

The fighting action takes place on a round, elevated platform. Each fighter begins the fight with a full power meter and one power meter refill in reserve that is activated when the primary meter is depleted. Thus, there are no rounds. The fight runs until one fighter is knocked out (no more power in their meter), one is knocked out of the arena (or steps/jumps out), or the time runs out.