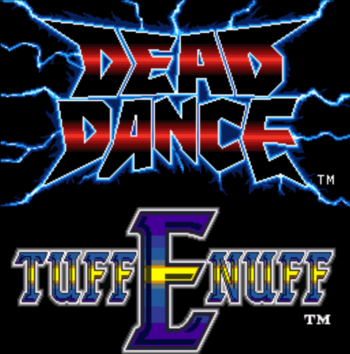 ◊
— The US versions' tagline on the boxart with a horrible design of the Antagonist.

Tuff E Nuff (or Dead Dance in Japan) was a fighting game for the Super Nintendo made in 1993 by Jaleco. Where in a Post-Apocalyptic world in the year 2151 (or 200X in the JP version), the "war to end all wars" were happening where only the strongest can survive and "Jade" (Or Jado in the JP version.) the self proclaimed "Fighting King" that built a huge tower to show off his strength. Those have fought the fighting king have not lived to tell the tale, until weeks later...

4 Great Champions were chosen to fight Jade. Their names are Syoh, Zazi, Kotono, and Vortz, in where they must face each other, then face the guardians of the tower and then against Jade himself. Only one can be champion, only one can be Tuff E Nuff.

...And that's how the game's story is...or lack thereof in the English releases. When the game came out in the United States and in Europe, none of the game's dialogue text or endings were included/translated for unknown reasons. The same with blood on the character's face has also been removed (also, Death Match has been renamed Fatal Contest if the timer is set on infinite.). However, the game did introduce its own special attack growth system, though only in Story Mode, after every couple of stages cleared, performing special moves will change in stylistic appearance, though it was mostly aesthetic and didn't do much difference in terms of damage and such, it was a neat touch to the game. Also, match ending replays where you can rewind, fast-forward, or frame-by-frame action. And a password system dependent by character and difficulty level.