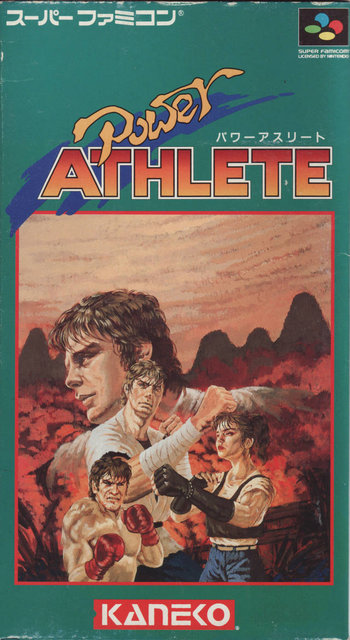 Cover box from the Japanese version.
Power Athlete (also known as Power Moves in the Super Nintendo Entertainment System version and Deadly Moves for the Sega Genesis version) is a Fighting Game published by Kaneko and developed by System Vision in Japan in 1992 and the U.S. in 1993.
Advertisement:

In a not so distant future, traditional sports were in decline and the general audiences want a new, much exciting sport. Meanwhile, in a small town of the good ol' U.S.A. a young martial artist named Joe was training for years in martial arts, until one day, an old fighter went to his house and he tells him he should travel to all over the world to meet other masters and to learn from them. So, with that goal in mind, Joe went overseas in order to be the best.

The game is notorious for some reasons: Unlike other fighting games of that era, you fight in a pseudo-3D arena, so you can move in diagonally. Due to that, rather than jumping by pulling the control pad up, you must press a button for that, at the expense that the special moves are more difficult to pull off.

Power Athlete wasn't particularly successful in its time, though the game had many novel ideas for its time, including the concept of increasing Joe's status every time he fights an opponent, where the opponent's stats determine which stat has the greater bonus for Joe, with the greater the gap, the greater the bonus. Naturally, if Joe's stats already greatly surpassed the opponent, he'll gain no bonus at all.

Not to be confused (in the English version at least) with the famous dancing contest, not it's about an athlete juicing him/herself.