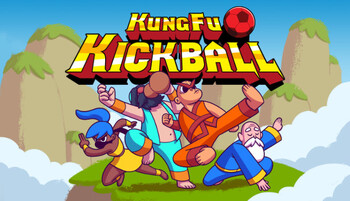 A team based fighting sports game where the best ball-kicker wins.
KungFu Kickball is an indie sports game developed by WhaleFood Games and published by Blowfish Studios and released in April 2021 for Steam, Nintendo Switch, Playstation 4, Playstation 5, Xbox One, and Xbox Series X.
Advertisement:

The game is a hybrid sports game that mixes kickball with kung-fu. Players can fly in the air and unleash punches and kicks to send the ball flying and must kick the ball into an opponent's goal and ring the bell. The game has a standard formula for fighting games with a single-player campaign as well as local and online multiplayer.