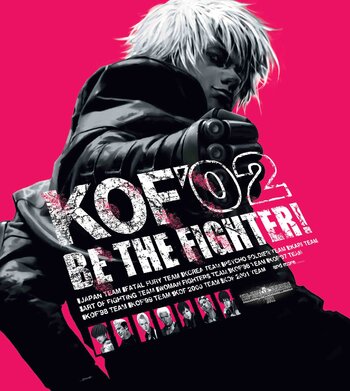 The King of Fighters 2002 is the ninth game in The King of Fighters series. It was released for arcades on October 10, 2002 before coming to the Neo Geo two months later. It was the second game to be published by Eolith after SNK's bankruptcy.
Advertisement:

With the NESTS Chronicles concluded in the previous game, KOF 2002 is once again designed as a Dream Match Game that brings back most of the cast from previous games, including some who didn't appear during the NEST Chronicles, such as Rugal, who is once again the Final Boss.

2002 is the installment where the series goes back to its roots. After introducing and tweaking the Striker system throughout the NESTS Chronicles, 2002 abolishes the Strikers entirely, returning to the standard 3-vs-3 format present in games before '99. In other words, KOF 2002 plays mostly like KOF '98 in its Advanced Mode. It's not an exact copycat of it, due to some major changes that adopt systems from the NESTS Chronicles games. Like before, you can spend one bar of Power Gauge meter to enter MAX Mode, but instead of just boostng your character, it grants you access to perform Super Cancel on any of your moves into a combo at expense of MAX Mode's duration. This allows creating a combo that, if used efficiently with very tricky timing, can become a death-dealing blow, turning the flow of a match at a moment's notice. Additionally, if you activate MAX Mode at low health, you can perform a hidden, character-specific Desperation Move (called "MAX2 Move") that is hard to connect but does a lot damage if you succeed to.

The game would eventually be ported to the Dreamcast, Playstation 2, and Xbox, with each port adding new content.

In 2009, SNK Playmore released a Video Game Remake, The King of Fighters 2002: Unlimited Match, for arcades and the Playstation 2, with an international release coming to Xbox Live in 2010. It adds the rest of the characters that were left out of the original game (Kasumi, Jhun, Xiangfei, Bao, and the Kyo clones from '99, Lin and Hinako from 2000, Foxy and Heidern from 2001, and all bosses from the NESTS Chronicles). In addition, the graphics and soundtrack was completely revamped, and a new character, Nameless, was introduced to replace K9999. It would later be released on Steam on February 27, 2015.

Teams In This Version