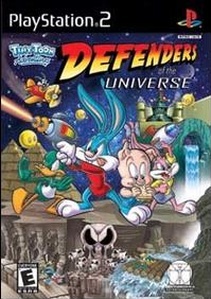 Tiny Toon Adventures: Defenders of the Universe is a Fighting Game that was being developed by Treasure and published by Conspiracy Entertainment for the Playstation 2 and was intended for release in mid-2002, with a Nintendo GameCube version seemingly also being in the works due to the game being listed in publication for Nintendo Power. However, despite development of the game being finished and it getting all the way to having an ESRB rating, box art and retail listings, it was cancelled for unknown reasons. A ROM of the game was eventually leaked online in February 25th, 2009 by a member of the Lost Levels internet forum, however, and is fully playable and completable.
Advertisement:

The story begins not so long ago in a galaxy really not that far away, where a planet called the Gold Star in the jewel system is seen. The planet is made almost entirely out of gold, and is inhabited by a peace loving and technologically advanced alien race known as the Bullion people, who have lived there undisturbed for thousands of years. Unfortunately, the planet is soon attacked by goons known as Drizzletroopers, attempting to conquer, ravage, loot and pillage it for their Galactic Overlord (Evil Max, a version of Montana Max with red hair and a vampire-like appearance, who is classed as a separate playable character in the game despite being the same person). Most of the Bullions are captured by the Incapacitator Frequency Machines the Drizzletroopers set up, but two particular Bullions, Zig and Zag, manage to escape to Earth to seek assistance to defeat the Drizzletroopers and save the Gold Star. They land near Acme Looniversity, and the game begins as Buster, Babs, Plucky and Hamton arrive for school.

This game is notable for having the entire surviving cast of the show return to reprise their roles as the characters, with Charlie Adler returning to voice Buster Bunny for the first time since the third season of show, and the final time Joe Alaskey would voice Plucky Duck before his death. Hamton, who's voice actor, Don Messick, passed away before the game, is instead voiced by Billy West in it. This game was also the final piece of Tiny Toon Adventures media produced before Tiny Toons Looniversity was announced. In terms of gameplay, the game plays similarly to Rakugaki Showtime, a Japanese-exclusive PS1 fighting game that was also developed by Treasure. The player starts out with Buster, Babs, Plucky and Hamton, but as they progress through the Adventure Mode of the game and do several playthroughs, they'll unlock more and more characters to play as, including most of the main cast of the show (yes, that includes Fifi), Maximus Flush, and several mooks, though it's worth noting that playing as anybody other than the main four in Adventure Mode will automatically skip most of the cutscenes. Each character can grab and throw objects and enemies as their main form of attack (with the exception of the flying characters, who instead shoot lasers), and have their own special move that can be used at will.