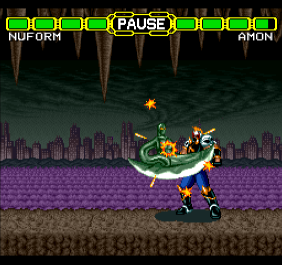 Doomsday Warrior (known in Japan as Taiketsu!! Brass Numbers) is a fighting game for the Super Nintendo Entertainment System by Telenet Japan's Laser Soft division in 1992 and was released in North America by Renovation in 1993.

An evil wizard called Main has brainwashed a group of warriors known as the Doom Squad to help him take destroy the world. The player takes control of any one of these warriors, who sees the errors of his or her ways, and has to fight the other members. As you beat opponents, you can use the experience points based on your remaining health to boost your stats.