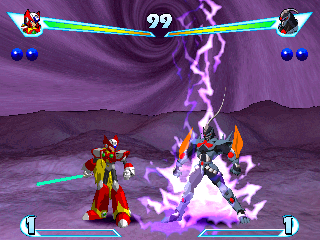 This'll be over in a nanosecond.
Project G is a 2009 PC Fighting Game by arashi200xjp created with Enterbrain's Fighting Game engine.
Advertisement:

The titular Project G was a project intended to save the world from pollution. However, Regear, who was created to fulfill the task, decides to Take Over the World instead. What he does after that? Well, he travels 10000 years back in time so he... can take over the world back then too, or something?

Regardless, a group of warriors from different time periods battle each other for the right of kicking his ass and setting things right. Notably, among them we have Zero—yes, Zero from the Mega Man X series—for some reason.

A review and more info can be found here.

And this is the game's homepage