In case you are looking for the actor sometimes referred as "Kung-Fu Master", go here. 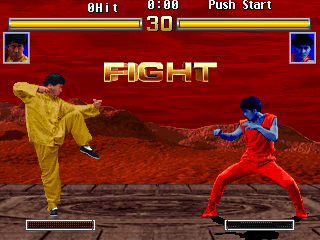 Pure Jackie Chan vs Oddly colored guy
"While most companies who resorted to the tired Mortal Kombat template of gore and brutality, Kaneko actually put a great deal of work into this game to balance it out and actually assure that there is some value in playing it, and they also make very good use of Jackie himself creating 3 different versions of him based on fan favorite characters of his movie past. Too bad he's an absolute a-hole throughout the game though. As you fight him, you'll lose and lose and lose and lose, and after each fight he'll laugh his ass off and mock you while speaking Engrish."
—Hardcore Gaming 101, [1]

Jackie Chan: The Kung-Fu Master is a fighting game created by Kaneko (the same company that created Blood Warrior) in 1995, and weirdly enough, tried to follow the steps of Mortal Kombat. That's right, it's a gory Fighting Game with digitized sprites that includes Jackie Chan!

How did they manage to release this without destroying Jackie Chan's image? There is blood and gore as long as Jackie Chan is not in battle.

Despite the game's unusual premise, it's surprisingly good. With a roster of six characters and three unusable Purposely Overpowered versions of Jackie Chan, good music, good graphics and smooth gameplay, it's one of the best Mortal Kombat imitators out there.

The game received a Updated Re-release called Jackie Chan in Fists of Fire, which saw changes to the game's engine, the 3 aforementioned versions of Jackie Chan made playable, and palette swaps for some of the returning cast otherwise.

This game is very obscure because it was No Export for You, and the Copy Protection was so well done that people were unable to emulate until late 2008.note  given the small amount of Arcade machines currently in existence, the only way to play it is in an emulator.