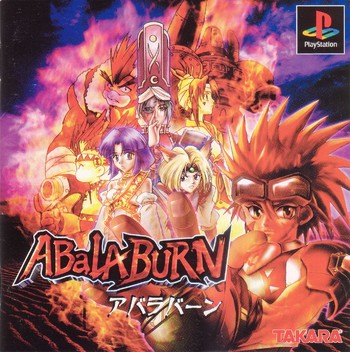 Abalaburn - The Battle Legend of Asterica is a little known 3D fighting/adventure video game developed by Tamsoftnote best known for Battle Arena Toshinden and Senran Kagura in 1998 for the PlayStation. It is noted for its surprisingly well fleshed out main characters and high quality graphics, but also criticized for its clunky and easily abusable gameplay.

The story is about the legend of Lemuria who grants the wishes of anyone who finds him after finding eight crystals around the world. Eight people, Blood, Ariel, Kleude, Rose, Bian, Pooly, Nate and Aquila/ Yura, all have some sort of hardship and wish to seek him out to resolve it. However, the journey isn't as simple as it sounds.

The most notable thing about the game was its Story mode, which functions more like an action game with fighting game elements used for battles. Movement is similar to Mega Man Legends, with the controls for using special moves are modified to fit the top down style. Players traverse around each continent trying to find the keys (usually held by monsters with yellow sparkles on top of them, but sometimes requires finding specific items to traverse), and fight a boss or two midway through each world after the first with the mechanic used in arcade mode before fighting with the other characters that weren't at the end of each continent. There's also minor platforming elements sprinkled in here and there. Arcade mode is similar to Battle Arena Toshinden.

Abalaburn has the following tropes: