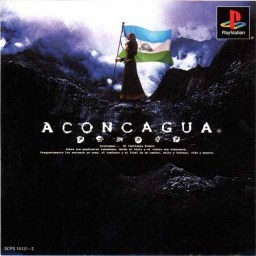 Aconcagua is a Japan only survival horror/Action-Adventure video game developed and published by Sony Computer Entertainment in 2000 for the Playstation. Despite it's an exclusive release with Japanese text, the game's cutscenes are voice acted in English and Spanish, which gives it a more realistic feel. It also has the distinction of being the last game Sony developed for the original Playstation.

As the result of a merciless leader, social, and political unrest plagues the South American country of Meruza. A woman named Pachamama is the leader of a Democratic movement to end this tyranny. However, on a plane ride back to Meruza, a bomb is set off, causing the plane to crash in the Aconcagua mountain. The game follows five survivors as they attempt to get off of the mountain, in time for the Meruzan Independence Day:

As the survivors make their way down the mountain, they must confront Meruzan troops sent to kill them all, as well as the possibility of someone in the group working with the Meruzan government to stop Pachamama from reaching Meruza's capitol in time to stop a civil war from breaking out.

As of July 11, 2022, a full English Fan Translation of the game was released.