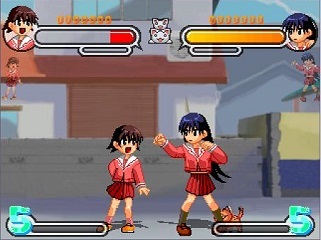 Azumanga Fighter, also known as AzuFight or A~Taisen Shiyo, is a doujin Fighting Game based on the popular manga and anime series Azumanga Daioh.

The game features the most popular characters as playables. Gameplay-wise, it uses four buttons: Weak, Medium and Strong attacks, and a special button, unique for each character. Naturally, as anything based on a comedy manga, this game doesn't take itself very seriously, and the characters sport comedic, and sometimes silly, moves and fighting styles while throwing the occasional Shout-Out to the manga series.