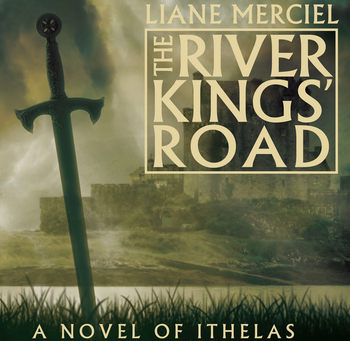 "But you're a knight."
"What of it? Any oaths I swore to Galefrid died when he did".
Odosse and Brys, the River King's Road

The first novel by Liane Merciel in the fictional world of Itheles. The book is set in two rivaling adjacent kingdoms of Oakharne and Langmyr, once part of the same empire.

Leferic, second son of Lord Ossaric has his brother (the warmongering Galefrid) killed, hiring a Thorn out of Ang'arta to do the deed. She does this by completely purging the town of Willowfield. Unfortunately for him, Galefrid's son survives the assassination attempt, leading to a bargain he does not want to make. Meanwhile, a Knight of Celestia (Kelland) and his companion (Bitharn) are tasked with finding out who exactly was behind the carnage.