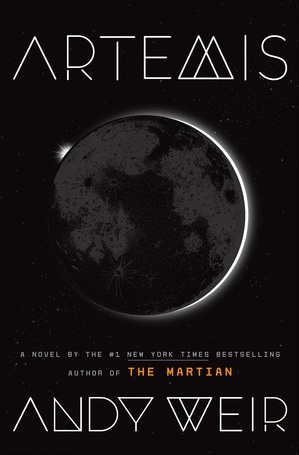 "Building a civilization is ugly, Jasmine. But the alternative is no civilization at all."
— Administrator Ngugi
Advertisement:

Artemis is the second novel by Andy Weir in 2017, following the success of The Martian.

Jasmine "Jazz" Bashara is a small-time criminal trying to make a living on the first ever lunar colony. When one of her wealthier customers offers her a massive payday in exchange for assistance in a corporate takeover (consisting of epic vandalism) she jumps at the chance, desiring more from life than her current lot. Alas, her plan doesn't exactly work out and she is forced to improvise another solution... until she finds her benefactor murdered and is caught up in a conspiracy concerning the future of Artemis itself. Definitely not what she signed up for.

Artemis takes some creative liberties, but it still is a hard science fiction.

A film adaptation was announced on May 2017, with Phil Lord & Chris Miller announced as directors, and Geneva Robertson-Dworet (Captain Marvel) writing the screenplay. No official release date has been announced.