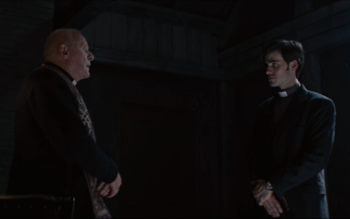 Two exorcists meet in Rome. What Could Possibly Go Wrong?
Father Lucas: The interesting thing about sceptics, atheists is that, uh, we're always looking for proof. Certainty. Question is, what on Earth would we do if we found it?
Advertisement:

A 2011 movie based on Matt Baglio's book The Rite: The Making of a Modern Exorcist. It follows a reluctant, sceptical exorcist.

It stars Colin O'Donoghue as Michael, a young seminarian who is doubting his faith, and Anthony Hopkins as Father Lucas, the experienced but cynical priest who trains him and lets him observe an exorcism of a teenage girl. Then things take a turn for the worse…