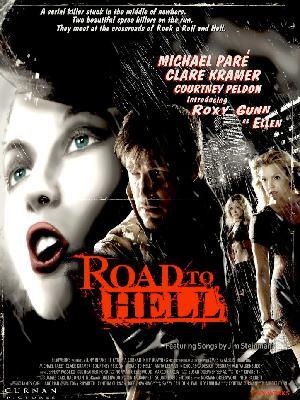 Road to Hell is a Fan Sequel to Streets of Fire, directed by Albert Pyun and written by Cynthia Curnan.

Set 28 years after the original, it deals with Tom Cody returning to Edge City in search of his lost love, Ellen. He travels in the hopes she can save him from his demons—but he's stopped by two seductive spree killers who oppose his efforts at seeking redemption.

The film features original music by Tony Riparetti and the Roxy Gunn Project, with Roxy playing the role of Ellen; Michael Pare and Deborah Van Valkenburgh reprise their roles from the original film as Cody and his sister Reva.

While an unfinished version was screened in 2008, the writers tweaked the script to add the character of Ellen Dream and Roxy Gunn's music, and additional scenes continued to be filmed. The final cut of the film had a late 2013 release date, and was released on DVD and Blu-Ray in 2019.