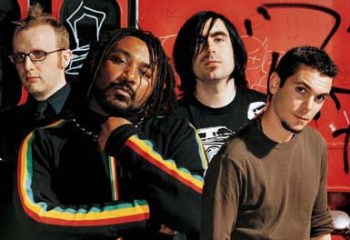 Blend up the RaggaMetalPunkHip-Hop.
Advertisement:

Widely celebrated Welsh Genre Mashup band known for fusing, as they state in one of their songs, Reggae, Heavy Metal, Punk Rock and Hip-Hop. Specifically, the reggae influence comes from Benji Webbe, who combines dancehall-style Ragga singing/rapping with Metal shouts and growls. Sometimes compared to Bad Brains and System of a Down, Skindred has been the subject of much appraisal for their unique sound and mostly lighthearted lyrics. They're even popular among Metalheads, who normally dismiss any musical fusion that has Metal and Rap, wary of any connection to Nu Metal. (Benji jokes that they're "Nu Reggae" instead).

Skindred were formed in 1998, in the wake of the collapse of Benji's old band, Dub War, which had a similar reggae/metal fusion. After unsuccessful stints on major labels, during which two different versions of the band's debut, Babylon were released, they finally signed to the Florida independent label, Bieler Bros., and released six more albums, Roots Rock Riot, Shark Bites and Dog Fights, Union Black, Kill the Power, Volume and Big Tings.

Their name derives from the word "kindred", and also refers to dreadlocks hair.