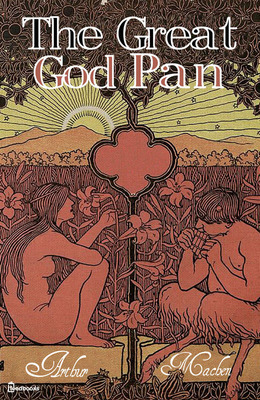 Helen Vaughan has got it going on.
"Great God, what simpletons! Show them Arthur Machen's Great God Pan and they'll think it a common Dunwich scandal!"
—H. P. Lovecraft, "The Dunwich Horror"
Advertisement:

Written by Arthur Machen in 1894 and originally published in a magazine, The Great God Pan is known for being one of the prototypes of the Cosmic Horror Story. It was a huge influence on H. P. Lovecraft, who used it as the basis for his own story The Dunwich Horror, as well as for the deity Shub-Niggurath. It is worth noting that the main themes of the story - the idea that there are Things Man Was Not Meant to Know and horrors outside of our reality that we do not understand - are very Lovecraftian in nature, making these tropes older than you think.

The Great God Pan is also considered by

Stephen King to be "one of the best horror stories ever written. Maybe the best in the English language." He has stated that the 2008 novella N. was a "riff" on it.

Deep in the countryside of Wales, an occult scientist named Dr. Raymond invites a friend, Mr. Clarke, to witness an experiment he intends to perform on a teenage girl, which he claims will allow her "to see the god Pan". The experiment is a success, however the procedure destroys the girl's mind, and she is left in a permanent catatonic state. Horrified, Clarke disavows Dr. Raymond and occultism.

Several years later in London, a man called Villiers runs into an old friend of his who's been brought to ruin by his wife, Helen Vaughan. Villiers, piqued by his friend's story, begins to look into the woman's past. Meanwhile, an alarming number of wealthy, prominent men are being driven to madness and suicide after encountering a mysterious woman known only as Mrs. Beaumont. Villiers' investigation eventually leads him to Clarke, who has answers about Helen and Mrs. Beaumont that are beyond his wildest ken.