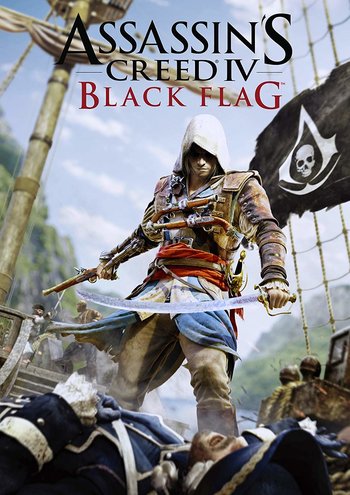 "This is a jackdaw... But if you should ask him, he would claim to be an eagle."
"Captains will curse our flag, and kings will fear it. As long as empires generate wealth and riches, we will be there to bleed them dry."
— Edward Kenway
Advertisement:

As usual for the franchise, this game features an all-new Assassin protagonist within a brand-new time period. Unusually, the Time Skip is backwards from the previous protagonist Connor - a first for the series - to the life of his grandfather, Edward Kenway (Matt Ryan), and set in The Golden Age of Piracy. Even more unusually, the present-day story moves forward from the climax of III, where you now play as a researcher working in Abstergo Entertainment gathering "footage" of Edward Kenway's life for the company to use in making their own spin on the story.

It was released on October 29, 2013 on the PlayStation 3, Xbox 360, and Wii U platforms, and was later released for the PlayStation 4 and Xbox One on November 15th and 22ndnote as a launch title for both respectively. A PC version came out on November 19th. A version for the Nintendo Switch came out on December 6, 2019 alongside Assassin's Creed Rogue as part of The Rebel Collection, with all single-player DLC included. It also has a non-canon manga adaptation.

The first trailer, released on March 4th, 2013, can be seen here

Soon after the game came out, a DLC campaign was released for it named Freedom Cry. It stars Adéwalé, Edward's Lancer from the main game fifteen years after the events of Black Flag. Tropes for it go on its own page, Assassin's Creed: Freedom Cry.

Ubisoft would later announce Skull & Bones, a pirate game with gameplay based on the naval combat of Black Flag developed by the same creative team at Ubisoft Singapore. Eight years after the release of the game, a South Korean webtoon sequel will focus on the life of Edward Kenway after the end of the Golden Age of Piracy.

Note that due to what happened at the end of the last game, be warned of unmarked spoilers.

open/close all folders
Tropes A-C
Tropes D-L
Tropes M-Z
Antó: What do you want, Englishman?
Edward: Edward Kenway. I'm here to warn you of danger. And I'm Welsh.
Antó: You all look the same to me.
Of all the money that e'er I had...
I spent it in good company...
And all the harm that e'er I've done...
Alas it was to none but me...
And all I've done for want of wit...
To memory now I can't recall...
So fill to me the parting glass...
Good night and joy be with you all.