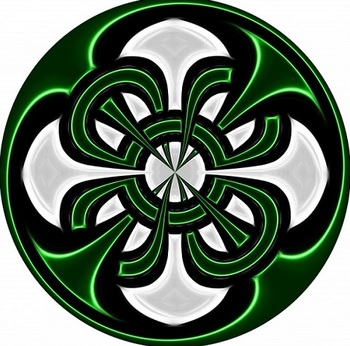 "Everyone is a visionary, if you scratch him deep enough. But the Celt, unlike any other, is a visionary without scratching."
— William Butler Yeats
Advertisement:

The Celtic Kingdoms cover a majority of The British Isles, with land in all five nations. They are the Gaelic Celtic Ireland, Northern Ireland, Isle of Man, and Scotland, and the Breton Celtic Scottish Lowlands, Wales, Cornwall, Cumbria, and (much of) Yorkshirenote Cumbria and Yorkshire, and the south of the Scottish Lowlands, comprise the kingdom known as Yr Hen Ogledd (in English: The Old North). It also covers Brittany in France, which has a proud Celtic heritage and whose inhabitants speak the Breton language.

It may be believed that Celtic is another way of saying Irish thanks to some American sports teams using it this way, as well as things like the Irish bands Celtic Thunder and Celtic Woman. The Celtic kingdoms are the areas in which the native people of the British Isles remained after permanent Anglo-Saxon settlement, which happened about the time that the Romans left, plus Brittany. In fact, all of the Celtic kingdoms remained apart from the English and French for at least a few centuries after the firm establishment of power in 1066.

The difference between Celtic and Gaelic is seemingly easy. In basic terms, Gaelic is the name of a family of languages, with Celtic being the family of languages that Gaelic sits under and also the overarching ethnic term. Gaelic may be referring to Gàidhlig/Scots Gaelic, which is not Scots (a distinct sub-language of English); Gaeilge, the Irish word for Irish; or Gaelg/Manx, the language of the Isle of Man. Where Celtic is a language, it can be referring to all of those as well as to Cymraeg, the Welsh word for Welsh; Kernowek/Cornish, which is not Anglo-Cornish (a specific variety of English); Cumbric, the historic language of Hen Ogledd (the languages spoken here in modern times are Scots, Cumbrian, and Tyke — all distinct of English); and Brezhoneg/Breton, which was brought over to Brittany by migrating Britons in the Early Middle Ages. However, English (French in the case of Brittany) is now the de facto language of all these areas, even if it's spoken with an indistinguishable accent. There's also such a language called Ulster Scots, which is spoken in Ireland. Celtic, of course, refers to the language, culture, heritage, and people pertaining to the Celtic kingdoms. So you can be Celtic and not Gaelic, but you can't be Gaelic and not Celtic.

The fact that Scotland and Ireland are very closely linked with their Gaelic history is probably the reason they are so often conflated, though doing this too much in Real Life might turn into a Berserk Button. A similar reaction will be received if you too often call anyone Celtic "English"note Of course, all of England was Celtic at one point, but that was before it was England. — even those living in England probably prefer British or Cornish/Northern. Wales and Scotland may also get mixed up (rarely Wales/Ireland), but the only place this is accurate was the Hen Ogledd.

The Geography of the Celtic lands is famously barely inhabitable — Meaning mountainous, arboraceous, cold, and wet. However, it is very verdant: Yorkshire and County Wicklow are known as "God's Own" because of their pure green mountains and untouched natural Eden-esque appearance. Yes, everything is green. That is, when everything isn't grey: because of the mountains and the overcast nature, expect grey rain and endless fog to be the sight greeting you there. People from these areas are going to be very hardy, and proud, as well as likely poetic at how beautiful their home is.

You've probably noticed that Cornwall, Cumbria and Yorkshire are all parts of England. Yr Hen Ogledd, of which the latter two were part, was in three primary kingdoms: Ystrad Clud to the North (Scottish Lowlands), Rheged in the middle (Cumbria) and Elmet to the South (Yorkshire). In the 600s, Northumbrianote part of England that would be completely separate from England because of Yr Hen Ogledd landlocking it into a corner — Scotland to the North, Cumbria to the West, the North Sea to the East, and Yorkshire to the South struck an invasion through Elmet and forced a political marriage with the rulers of Rhegednote The royal lineage of Rheged features Urien and Owain, the husband and son of mythical sorceress Morgan le Fey. Thus, the Old North was absorbed into England, though a lot of the people there were likely unaware of this for centuries, because it is so big and rural, and it's desperately hard to get to some of the settlements (especially the Pennines). Cornwall held out a bit longer, being invaded by Wessex and then conquered by the crown during the 800s — and they definitely knew about it. Both areas persisted with their own languages for a very long time, Cumbric dying out sometime in the Middle Agesnote probably around 1200, and Cornish being seen off around 1800. However, Cornish has since seen a revival through the 20th Century, and whilst there are no written documents of Cumbric the language is still evident in the present forms of English spoken in the area as well as traceable through documents from Wales and Scotland, and so it is hoping to be reformed as the reinvented Cumbraek.

Rough shading of the Celtic kingdomshere 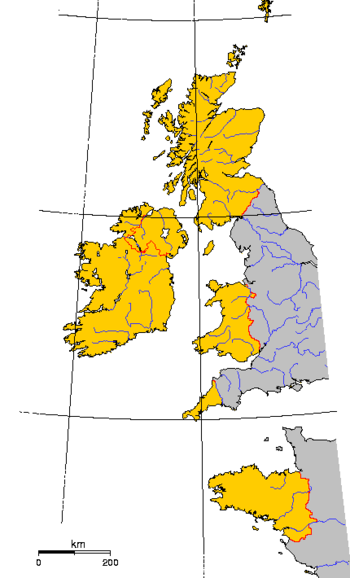 There are a lot of myths and legends, as with any ancient enough civilisation, and many are still reasonably well-believed today (even if the locals don't always want to admit they believe in them). The most famous is probably that of King Arthur and the various exploits in this cycle, set predominantly in Wales and Yr Hen Ogledd (Camelot supposedly being in present-day West Yorkshire).

The mythology of the region includes the origin of the Leprechaun, Banshee, and The Fair Folk, making any mysterious bit of nature stumbled upon (which is a lot) appear to be a portal to the Land of Faerie.

Celtic music is a subset of Folk Music, with a lot of strings and pipes used — including the local Celtic harp and bagpipes. It is often known as "trad", as in the 'trad tunes' that Ed Sheeran raps about in his Celtic fusion song 'Galway Girl'. The sounds will be designed to take you to a place on the open moors or mountains. You may well get people dancing along with their Irish dancing, Morris dancing, Highland dancing, May dancing, and whatever that thing the Scots do around an X on the ground. May be performed at a cèilidh.

A very non-comprehensive list of works of fiction which not only depict these lands but with an emphasis on their national identity.