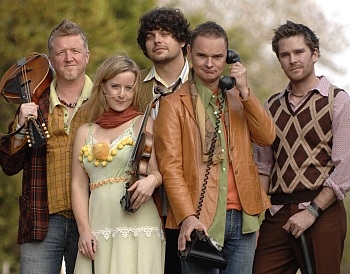 Gaelic Storm is a Celtic band formed in 1996 when Patrick Murphy and Steve Wehmeyer joined Steve Twigger and Brian Walsh to perform at O'Brien's Irish Pub and Restaurant in Santa Monica, California. They subsequently appeared in the movie Titanic (1997) as the steerage band, performing "An Irish Party in Third Class". This gained them a lot of popularity, and the band has been touring around the world since, playing over 120 shows a year. They have released nine studio albums and two compilation albums, which have consistently ranked high on the Billboard World Music Charts.

Tropes applying to Gaelic Storm or their music: