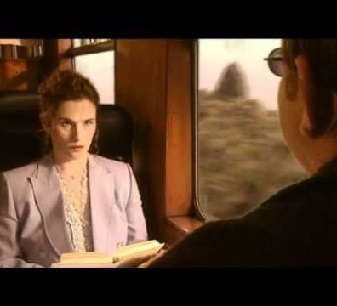 A chance encounter on a train between a young woman and a blind man. She wants to read her book, he wants to chat. She realises that he won't leave her alone. She starts to get annoyed...
Advertisement:

The whole movie is in Irish and mainly concerns two characters, Catherine (Bradley) and Paul (Gleeson).

After ruining one of the few things Paul was proud of (knowing his train route off by heart), Catherine deliberately causes an asthma attack, then holds his inhaler out of reach until he dies. She gets off at her stop.

The short has lots of humour, up until the point where Catherine starts torturing Paul. It can be viewed in its entirety here