Literature / The Children of Lir 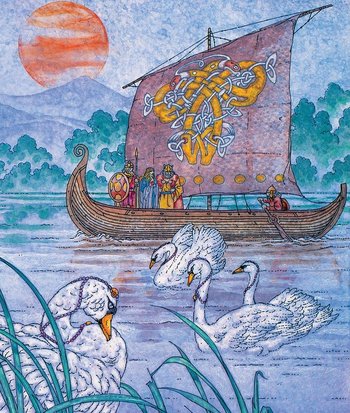 The Children of Lir by Jim Fitzpatrick
Advertisement:

"The Children of Lir" is an Irish fairytale that is one of the more well known and beloved of the country's mythology. Different versions of the tale exist, including a full length novelization by Michael Scott but in a nutshell the tale is as follows:

Lir of the title is a King in Ancient Ireland and a member of the Tuatha De Danann - a race of immortal fairies - and is married to a beautiful woman called Eve/Eva with four children Fionnuala, Aedh/Aodh and twins Fiachra and Conn. While the children are still young they lose their mother. In some versions she dies, others she goes into a long lasting sleep. After her death Lir marries her sister Aoife/Aife who initially loves the children but grows to hate them as she fears Lir loves them more than her.

One day Aoife takes the children to Lake Deravaragh (a real lake in Ireland) and casts an enchantment on them, transforming them into swans and forcing them to remain that way for 900 years. Per the terms of the spell they must spend 300 years on the lake (where they have their father to tend to them), 300 on the Sea of Moyle (which, while calm, they spend with no one but themselves), and a final 300 on the Bay of Inish Glora (which is constantly battered by brutal storms). Then they can be turned back by hearing the sound of the Bell of New God. They live out the years of the enchantment and in the final years they cross paths with a Christian monk (in some versions St Patrick himself) who agrees to build a church and bell for them. The swans become famous for their beautiful singing voices and on the day they are to hear the bell the Princess of Munster demands to have them as a present. As they are taken away they hear the sounds of the bell and turn back into their human forms. Some versions have them turn into withering old people who die quickly. Others have them keep their youth since they are immortal.

This fairytale provides examples of: