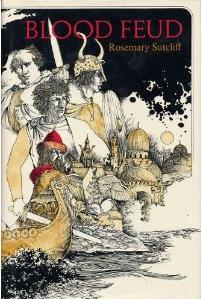 Taken as a thrall in a Norse shore-killing, Jestyn the Englishman is sold in the slave markets of Viking Dublin to the Northman Thormod Sitricson. Freed after fighting at his master's side, Jestyn returns with Thormod to Denmark, only to find that two of Thormod's oldest friends have killed his father. Jestyn and his blood-brother will follow them across the Rus Lands to the Golden City of Miklagard, but before they can settle the score, they are swept up in the gathering of Khan Vladimir of Kiev's forces, sailing to the wars of the Byzantine Emperor Basil II, the Bulgar-Killer.

Blood Feud was adapted into the mini-series The Sea Dragon by Thames Television in 1990.