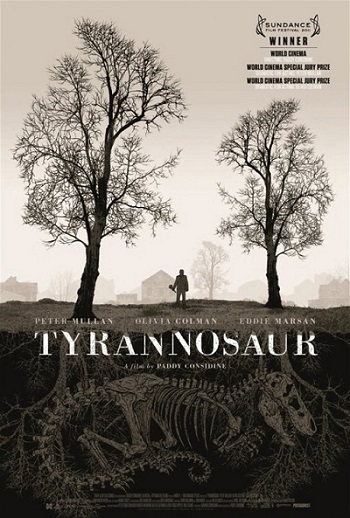 Hannah: I feel safe with you.
Joseph: Nobody's safe with me.
Advertisement:

Tyrannosaur is a 2011 British drama film written and directed by Paddy Considine. His feature directorial debut, the film is also an adaptation of Considine's 2007 short film Dog Altogether, and continues its story with the same main characters. It stars Peter Mullan and Olivia Colman, with Eddie Marsan, Paul Popplewell and Sally Carman in supporting roles. Mullan and Colman were both handpicked by Considine for their roles, with Considine and Colman having previously shot Hot Fuzz together.

The film follows Joseph (Mullan), a man plagued with violence and rage, and on a self-destructive downward spiral as a result. As he descends further into regret and self-loathing, he ends up in a second-hand shop, hiding after fleeing from the scene of a recent assault he inflicted.

In doing so, he meets Hannah (Colman), a Christian worker at the shop, and although he harshly rebuffs her at first, Joseph slowly finds that she may be the single grain of redemption that might restore hope to his life. Unfortunately, there is more to their relationship than meets the eye, as Hannah is hiding a secret of her own that leads to serious consequences for both of their lives.

Although the film is not completely autobiographical, Tyrannosaur depicts an environment similar to what Considine witnessed growing up on a council estate in the Midlands. Also, in writing Dog Altogether, Considine based the character of Joseph loosely off his late father (also named Joseph), naming the short after a saying his father used to define a bad situation.